The traditional manufacturing market is worth $12tn, and HP is betting that 3D printing will take a big slice of that lucrative pie. Robert Scammell finds out about the company's vision for the future of additive manufacturing.

Also known by its technical name of additive manufacturing, 3D printing is the process of creating three-dimensional objects by adding layers of material that are joined or solidified under computer control.

It is a market that was worth $12bn globally in 2018 and is expected to experience significant growth over the coming years. Since HP split into separate commercial and enterprise ventures – HP Inc. and HPE – in 2015, HP has focused on the commercial global printing and computing markets. And a big part of its future plans for its printer business is 3D – specifically prototyping and production.

Additive manufacturing has been around since the 1980s, but HP’s 3D printing journey started two years ago. Initially, it was just with monochrome plastics, but as the technology has matured, so has HP’s offering: it has since added colour and in September last year launched the Metal Jet 3D printer, which is able to 3D print stainless steel parts.

HP says that big customers, such as Volkswagen, BMW and Primo Medical Group have already placed orders for it via its production partners. However, the company will have its work cut out for it, with strong competition from the likes of Stratasys, EOS and 3D Systems, to name a few. 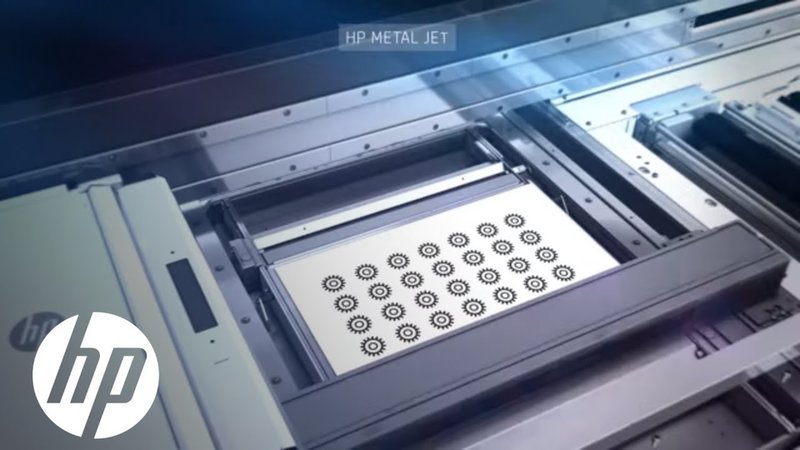 Why 3D printing will disrupt a $12tn industry

By refining and improving these areas, 3D printing can play to its strengths, such as cutting the time taken to get from design to the final part.

“If you think traditionally when you create a plastic part on some type of CAD software, then you need to send it away and they need to create a prototype for you,” explains the 28-year HP veteran.

You think about traditional linear manufacturing, you create that part, then you have it produced, typically overseas. There’s cost and time to get it back into the country where it’s consumed."

But with 3D printers, you can create the prototype on site. This results in a faster cycle time, which can also be improved by manufacturing parts inshore, rather than thousands of miles away.

“ You think about traditional linear manufacturing, you create that part, then you have it produced, typically overseas,” says Brasher. “There’s cost and time to get it back into the country where it’s consumed.  That adds cost to and also slows down your production process. If you can do all that onshore it creates a great advantage for both the companies and the customers.”

He adds that it’s a process that benefits the planet too, by reducing the carbon footprint that results from shipping parts around the world.

The printer that prints itself

HP’s support of 3D printing technology is unsurprising, given that it is in the business of selling 3D printers. But the Pal Alto-based company doesn’t just talk the talk: it walks the walk by 3D printing parts for its own computers and printers.

For example, HP’s most recent 3D printer, the Jet Fusion 3D 3200, contains 140 parts that were 3D printed by the company’s 3D printer. “It’s the printer that prints itself,” says Brasher.

But it’s not a publicity stunt, he adds – it’s economics.

“Right now if you look at the break-even point for our products, anything that is a part that is consumed by more than 55,000 parts in a part run, it’s better to do it with traditional manufacturing. And that’s what we do,” he says. “But parts that are less than 55,000, it’s actually better to do on 3D manufacturing. You’ll get it for cheaper and you’ll get it for the same quality and you actually get it in a more timely fashion.”

Overcoming the challenges of 3D printing

One of the criticisms of 3D printing is that the technology is expensive. The HP Metal Jet, for example, will start shipping in 2020 at around $399,000.

Brasher accepts that cost is perhaps the biggest barrier to 3D printers, but says HP’s approach of creating an open materials environment will help to overcome this.

“We want to drive adoption for the entire industry," he says. "And so essentially the open materials platform allows not only HP but also its partners to develop materials. We think if we do that it will actually increase usage, which will drive down part cost.

He adds that we’re already seeing a reduction in raw material cost for 3D printing. But alongside cost, those previously mentioned factors of quality and speed will also need to improve.

The designers of the future

Brasher is thinking long-term about HP’s 3D printing mission, specifically the workforce of the future. While some warn that 3D printing will kill off some traditional manufacturing jobs, there is also an opportunity for new roles to emerge.

For example, with traditional manufacturing a plastic part is made with injection moulded plastic. This involves a metal mould that the plastic is injected into. The process means there are some constraints, such as the design having to be small enough to fit into a mould.

“With 3D printing, when you’re actually building it from the ground up and literally doing it layer by layer, you don’t have any of those same constraints,” explains Brasher. “You have to design differently. So we need to create the designers of the future to do that.”

Last June, HP co-hosted an All-Party Parliamentary Group roundtable discussion that explored what the government can do to help improve the UK’s productivity through 3D technology adoption."

From a UK perspective, that will require leadership from government. Last June, HP co-hosted an All-Party Parliamentary Group roundtable discussion that explored what the government can do to help improve the UK’s productivity through 3D technology adoption. “Frankly, industry has a role to play, but also government,” says Brasher.

But ultimately cost, quality and speed are the three drivers to disrupting a multi-trillion dollar industry, and each area requires equal attention for that to happen.

Robert Scammell is a staff writer Verdict.co.uk where this article first appeared. Visit Verdict.co.uk for daily business news and analysis  >>