Intelligent awareness: the next step towards autonomous ships

Rolls-Royce is using Google’s Cloud Machine Learning Engine to improve its intelligent awareness systems, a vital component of the company’s vision to bring autonomous ships to the oceans by 2035. Patrick Kingsland asks Rolls-Royce's Iiro Lindborg how Google’s AI technologies could help make ships smart enough to run without a crew.

It is an idea as disruptive as the smartphone, according to Rolls-Royce’s marine team. “Autonomous shipping,” the company said in a recent position paper, “is the future of the maritime industry,” and “will revolutionise the landscape of ship design and operations”.

As early as 2020, Rolls-Royce envisages a future of reduced crews and previously human jobs supported and operated shore-side. By 2025, the company says there will be remote controlled unmanned coastal vessels and by 2035, fully autonomous unmanned ocean-going ships.

It is a bold vision, but how will it work? At its heart, says Iiro Lindborg, general manager, remote and autonomous operations at ‎Rolls-Royce, is the design of intelligent awareness systems.

“This is the essential ingredient that means you won’t need to have a crew on board,” Lindborg says. “It is about replicating the situational awareness of what is happening around the vessel at all times.”

As the first step towards autonomy, Rolls-Royce envisions its ships being controlled from remote operating centres. All images courtesy of Rolls-Royce.

The road to full automation in shipping

Rolls-Royce began developing intelligent awareness systems back in 2015. Its system works by fusing data from a range of sensors, including night-vision, thermal and normal HD cameras, with radar information and life-based sensor systems.

“The first system we are creating will be purely advisory,” Lindborg explains. “In the second phase, we will link the advisory system to the vessel's control system, which means the machine detecting and observing the vessel can also control the vessel.

“This stage will still have humans in the loop, logging and monitoring the deviations. After that, the third step will involve moving to more autonomous operations where the crew will be monitoring what is going on and the machine will do most of the work.”

While that final stage remains some way off, Lindborg hopes the first phase of Rolls-Royce’s intelligent awareness product will become commercially available by the end of 2017.

“We saw a need for these kinds of solutions to be introduced into existing vessels because of the number of incidents they have,” Lindborg says. “These incidents are often related to human errors such as a group being fatigued. Our system is solid and can be used already on vessels as an advisory system to help a crew make better judgement on daily operations.”

In the second phase, we will link the advisory system to the vessel's control system, which means the machine detecting and observing the vessel can also control the vessel.

What type of scenarios could the current system be used in? Lindborg offers the example of a large vessel approaching the port of Shanghai, weaving past dozens of smaller boats, leisure craft and fisherman. Due to the current of the river, which captains must transit through to access the port, ships operating in Shanghai are required to maintain a speed of more than nine knots.

“You need to be aware of where those vessels are at all times,” Lindborg says. “Coupled with the speed, this can be really challenging for vessels. What our system does is detect and also track these boats to help relieve some of that pressure. It means the watch person doesn't have to be constantly alert, the machine can help them.”

“Our customers were really happy about the test pilot, the resolutions and the answers that they got from the system,” he says. “It has provided additional safety features for their operations and the crew members also adopted the system well. They said that it increased safety and that it is not just one more system to be used – but is actually there for a purpose.”

Rolls-Royce believes intelligent awareness systems will make vessels safer and easier to operate by providing crew with an enhanced understanding of their vessel’s surroundings.

“We’ve been developing our own machine learning application over the past year and have been looking at possible partners to collaborate with,” Lindborg explains. “Google fits our strategy well and we are partnering with them for our machine learning programme.

“In future applications we are also looking at Google's speech recognition system. When moving towards autonomous operations, vessels will need to provide information and signals to other vessels. With speech recognition, our system will be able to automatically detect messages and send its own.”

As the company moves closer to designing a fully autonomous vessel, there will be further collaborations, Lindborg adds. “We are looking to build a whole network of companies that can contribute to this end goal of autonomous operations,” he says.

Video: Rolls-Royce demonstrates the user interface of its Intelligent Awareness System for vessels 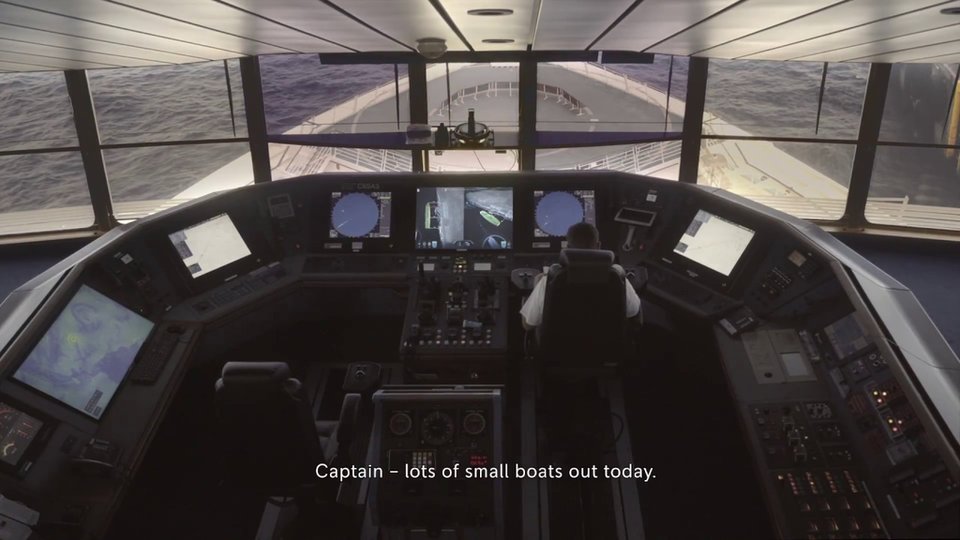 Of course, barriers to full automation remain, chiefly regulation. When a vessel sets sail, it is beholden to a dizzying array of national, international and private laws. And as with self-driving cars, regulatory authorities are playing catch-up.

“Maritime law does not anticipate the development of remote or autonomous ships,” Rolls-Royce said in a recent position paper. “This presents many ambiguities. For example, does a ship’s master or crew necessarily have to be on board the ship? For remote controlled and autonomous shipping to become a reality we need efforts at all regulatory levels.”

Nonetheless, while Lindborg admits the journey ahead will be “a long one”, he is confident the march to autonomous shipping is inexorable. “Development is going faster than we originally thought,” he says. “There is now interest in this field all around the world.”